Showing up for The Tipping Point | Daniel Barber - I Am Sound, LLC 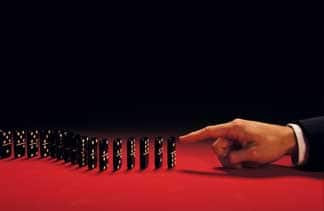 Are we just tiny cells with an arrogant delusion that we can make a significant difference within massive Gaia being, or are we actually more powerful than we've allowed ourselves to imagine?

People who study complex systems like ecosystems, markets, etc. point out that systems often go through long periods of gradual change. Then at some point the characteristics of the system are such that profound change can happen seemingly overnight. The system essentially “flips” from one state to another.

One of the characteristics of those moments when these “perturbations” develop is that relatively small things that would normally not have much influence on anything can be decisive scale tippers.

This election season has left many of us discouraged about the choices we are presented with, and also resolved to make our choice and express it.  We’re tired of the derision, disrespect and division, but it’s clear that there are choices (at the national, state and local levels), and the differences between the options matters.

There are plenty of reasons not to even talk politics. Wrestling with different perspectives ain‘t a walk in the park. The alternative, though, is to relinquish power to those who are more than happy to take it from our busy or bored hands.

Now, what if you had a credible reason to believe that YOUR actions over the course of the next two weeks could actually impact the balance of power in the United States Senate?

Would you be interested in considering what you might want to do given such a rare opportunity to make what could be a significant difference in the tone, decisions, laws, vision and possibilities of our society for the foreseeable future?

Check this out from fivethirtyeight.com. Especially if you’re in North Carolina. The first graphic illustrates the potential influence of North Carolina in determining the balance of power in the US Senate, according to a meta-analysis of the most recent polling. We are the most likely of all the currently red-polling states to go blue in this Senate race.

The second graphic is a “voter-power index.” As Nate Silver describes it, this is the relative likelihood that an individual voter in a state will determine the majority party. As an NC voter, you have more potential influence on the balance of power in the Senate than a voter in any other state.

Take that in for a moment or two.

What might you do in the next two weeks given there is good reason to believe that YOU could well have a measureable impact on the US Senate? And I not talking about just your vote. We know of multiple national races in the last couple of decades that were decided by a few hundred votes.

What if you took the extra steps, maybe just a few hours over the next two weeks, to make some phone calls, do some door-to-door canvassing, offer rides to polling places, etc. What if you invited a few friends to play along?

What if you engaged your network, and they engaged theirs, and we all kicked it for a couple of weeks? How about if one of the people who heard from a friend of your friend decided to spend all weekend making phone calls to people across the state and ended up talking to several hundred people and single-handedly convincing many of them to go vote?

Imagine waking up after two weeks of voter turnout work/play along with several friends of yours, each of whom spoke on the phone or in person to 25, 50, 100, 200 people apiece, and you learned that Deborah Ross won by 639 votes…

Now imagine waking up after passing on this opportunity for whatever reason and learning that the Republican’s money machine paid off again around the country to “protect them from another Democratic President,” and she LOST to Richard Burr by 639 votes.

The Democrats wouldn’t take the Senate after all, Paul Ryan would chair the budget committee and we’d be looking at at least another 2 years of polarized and paralyzed governing.

Both of these are very real possibilities. And I’ve realized that I am now ready and willing to do whatever I can to encourage you, myself, and whoever we all know to pitch in over the next two weeks and get a whole bunch more people to the polls.

The payoff may indeed be one of those rare system flipping moments.

It is said by elders that your words are your prayers. I pray for this society to emerge into the light of its better angels. I pray for wisdom, compassion and creativity to prevail over rage, revenge and retribution. I have more prayers and I know you do, too.

I pray for leaders who are able to discern their own wisdom and also listen to the will of ALL the people regardless of their net worth or how much they contributed to their campaigns. I pray for leaders who will listen to the four-leggeds, the tall standing ones, the finned ones, the winged ones, the crawling ones, the water, the air, Earth for guidance on how we can ALL live together on this planet that seems to get smaller and smaller every year.

And I pray that we will have the courage to speak, shout and sing our prayers. Finally, I pray to remember that my prayers are amplified a thousand-fold when I play them out with my actions.

Maybe we are cells of Gaia. But I think it’s probably safe to say that we matter more than we think. Let’s do this…. J