Feeling as if the intentions were respected and perhaps, could be a reality

I especially liked the way Daniel kept going back to the goals/intentions that we wished to manifest. It was a theme that he kept referring to and it kept me on track, feeling as if the intentions were respected and perhaps, could be a reality, with our tenacity and persistence,...and patience! which are all the same, in a sense!

I have a healthier relationship with myself as a result and I feel more alive.

I feel that I am a little bit more accepting of myself, allowing more of me to be expressed creatively through music, but also in general. This is a huge gift to me and something I have been working with for a long time.

When I originally signed up for this music process with you I did not really know what to expect. This has been an amazing process of self discovery, quite humbling at times. I know I just scratched the surface but this has been a lovely experience and I will be able to apply the principles, not only to guitar, but to other creative expressions and to life. I have a healthier relationship with myself as a result and I feel more alive. Working with Daniel has been a very healing experience for me!

Informality, spontaneity! Everybody having a chance to participate and nothing judged. Use of body language for expression of thoughts and emotions. Variety of modalities. Very creative in making it interesting and meaningful.

Let’s Talk About You

Are you curious about how the path may alter things for you?  Click here to connect.

It’s ten years ago.  You’re progressive, centrist or conservative.  Status quo, reformer or revolutionary.  You’re one unique and precious piece of the national mind and at some point you'd find yourself voting in a Democratic primary to determine who will face someone who in the previous month consolidated power over Congress (the Supreme Court already in hand) and immediately began a purge of the leadership of the intelligence services to go along with their command over the DOJ, FBI and.. the military.

Your choices on that fantastical day would be between two old white guys, both lifelong politicians each of whom continue to repeat the same thing they’ve been saying for decades, and a capable, smart and strong woman with a track record of accomplishments you like.

With years of experience teaching finance, this woman has loads of ideas, detailed plans and a fierce passion for monitoring, mediating and reigning in the corrupting and disproportionate influence of money in the society.

The stakes in the general election would be profound with the continued existence of the American experiment in democracy in legitimate question.

It would appear possible, even predictable, that a simple majority of votes (say, 50-54%) in the general election (electoral college or no) would be insufficient to compel a peaceful transition of power.  That if a close election were stolen in broad daylight, few would be surprised, and few would have any apparent recourse.  (btw, the adversary's supports also have most of the guns.)

So then, to be on the safe side, a ~55-60% (or more?) landslide MAY be necessary.  That exact figure would be impossible to know.

Which of these capable, well intentioned (and flawed) people would seem to be the most likely to attract support from the widest swath of the American electorate who want to (restore and) keep the democracy?

It would appear this person would need to be someone who could conceivably inspire the support of BOTH of the other two candidates in the race.  Someone who could be seen as “supportable” by both wings of the party.  AND the potential to attract support from the other party in the general election would help with prospects for achieving something approaching a national consensus.

To simplify somewhat (setting aside personal animosities in deference to democracy itself), which of the 3 could most conceivably win the full-throated support of BOTH the other candidates?  i.e.  who could, as the differences in approaches dissolve into the power of the commonalities, be the candidate whose platform and policy positions would align most closely with that of the other two?

Would it ever be too late to recognize a much better way to save your house from burning than the one most people have in mind so far?  Especially when that option is still available, and you’d be more likely to save your home? 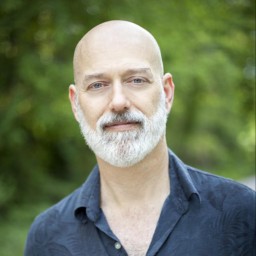 Perhaps more than ever, people are feeling unsure. The most valuable skill we could possibly learn is to navigate the unknown masterfully. I’ve spent my career working with many wonderful and wise people addressing numerous persistent challenges facing individuals, communities and society. I began my career in social work, did statistical analysis of social systems for a decade and spent 15 years doing promotional videos for nonprofits. And I was a deeply engaged activist for campaign finance reform and against the death penalty. Throughout most of that, a central question was always “how do we get from where we are to where we want to be?” After years trying to fix the world, I had a series of epiphanies in 2001 pointing me toward my own healing work. I ended up playing music professionally and experiencing the transformational power of sound-making for shifting energy and making connections. I now think my previous "how" question is unproductive and hobbled with paralysis by analysis, myopia, and other distortions. I find a more fruitful question is "What do I do now?" This tends to direct us more immediately toward what we want to see, as who we want to be. My name is Daniel Barber and my spirit name is Two Trees. Since 2015, I've used a process I designed called TAP the Flow to help people quickly learn to improvise on piano, which reshapes their relationships with themselves and nurtures confidence and creativity in all areas of their lives.

Discover  how you may be

and 6 surprising ways to...

Get this PDF & Free your muse!(some think these tips are heresy)  ;-)